Stay midweek and save up to 15%!  Click here for more info & to book today.

We’re excited about this upcoming mountain bike season.  In many ways, it feels as though it is our first real mountain bike season.  Steve Ovitt built us a series of new single-track trails late last fall that take the Garnet Hill  mountain bike trails to the next level and make the system fun and accessible for a variety of ability levels.  In addition, this will be the first year that the Outdoor Center is open during the summer as a hub for Outdoor Sports, much as it is during the winter season.  During this introductory season, we are running a special offer for our regulars.  2017-2018 Garnet Hill Ski Season Pass Holders : Purchase your pass in person to get 50% off your 2018 Mountain Bike Season Pass.  Must show valid season pass at time of purchase. 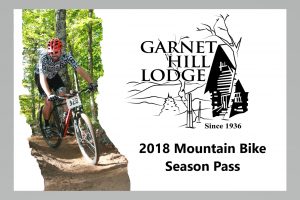