Top 3 Craft Breweries in the Adirondacks 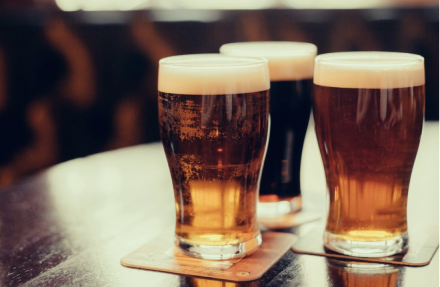 The meteoric rise of craft beer in the United States hasn’t quite reached North River, NY, yet. However, there are nearly a dozen craft breweries in the Adirondacks within an hour of Garnet Hill Lodge. While you’re unlikely to take a day trip to each Adirondack brewery, you’ll likely feel compelled to make a pit stop for a roasty stout or coffee porter during your midday winter excursion. Luckily for you and your group, Log House Restaurant and Pub always has a rotating tap list that features many of the best breweries in the Adirondacks.

The Best Breweries in the Adirondacks

To ensure that your wintertime escape to Upstate New York is nothing short of flawless, we’ve compiled three of our favorite craft breweries in the Adirondacks. Narrowing down the area’s best breweries wasn’t easy as we’ve fallen in love with countless regional ales and lagers over the years. These three establishments require a 26-to-38-mile drive from Garnet Hill Lodge, so please remember to drink responsibly.

The first stop on your self-guided Adirondack brewery tour should be Bolton Landing Brewing Company, a family-owned and operated Lake George staple. Bolton Landing serves bar food, such as wings, fries, and bratwurst, so it’s technically a “brewpub.” They’ve been turning heads since their doors opened in 2017 thanks to a diverse lineup of trendy New England IPAs. The brewery’s exterior has the appearance of a lake home, but the sleek interior, highlighted by brand new barstools and modern backsplash, is fitting of the times. We recommend purchasing a flight of the Tight Squeeze IPA, Black Mountain Porter, Lei’d Back, and Up In The Air.

Schroon Lake’s Paradox Brewery has been a mainstay in the Upstate New York beer scene since 2013. The husband-and-wife duo at Paradox Brewery is weeks (perhaps days) away from opening their brand new taproom in North Hudson, which aims to draw thousands of more visitors per year based on its location, size, and mountain vistas. But don’t overlook the allure of a polished, modernized taproom with double the brewing space—which inevitably leads to more taps and varieties. Many locals believe that Paradox is the most reliable brewery in the Adirondacks because they always have a diverse tap list. We’re partial to the classic Paradox Pilsner, always-tasty Weather Rotating Hoppy Series, and dry-hopped Beaver Overbite Imperial IPA.

The aptly-named Adirondack Brewery is the region’s most popular brewpub. Unlike most breweries in the Adirondacks, they bottle four year-round brews: an amber ale, New England IPA, pilsner, and craft cider. Interestingly enough, Lake George’s New England IPA actually rotates its hops every 90 days. It’s a fun way to entice beer aficionados to keep coming back for the latest version. The rustic, kitschy pub serves above-average bar food, steak, and seafood, making it a nice spot for lunch and a pint.

As we say “sayonara” to yet another gorgeous autumn, the folks here at Garnet Hill Lodge gear up for the highly-anticipated winter sports season. For those who don’t already know, our Outdoor Center rests along the edge of over 55 kilometers of cross-country ski trails, seemingly endless snowshoe possibilities, and even fat-tire bike tracks. We’re one of the only Adirondack family resorts to provide our own backcountry trail system, which is entirely free to all guests. To learn more about our many seasonal promotions, please visit us online.