Looking to ski or snowshoe? Make sure you check out our trail conditions before heading to our Outdoor Center.  Click here for more info. 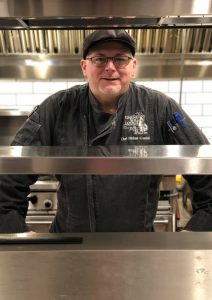 Garnet Hill Lodge is proud to introduce our new Executive Chef, Michael Crandall.  Michael has been with us for a few months but with our newly renovated kitchen now up and running he is able to truly show his culinary expertise.  He has created an outstanding new menu for the Winter season that you must try.  Both dine in and take out options are available.

Originally from Oneonta, NY, Michael began his career at the Holiday Inn Turf on Wolf Road in Albany, NY.  Michael has worked in downstate NY, Pennsylvania, Florida, and Vermont and most recently was the Executive Chef at the Queensbury Hotel for nearly 14 years.  Michael and his family have lived in the area since 2004.

Michael says he is “thrilled to be a part of the team at Garnet Hill Lodge and to be afforded the opportunity to work in the beautiful and peaceful Adirondacks”.